Blade and Bone:
The Discovery of Human Antiquity

In the first half of the 19th century, it became apparent that many animals that once lived on the earth were now extinct. There had been an age of primitive mammals, dominated by cave bears and mastodons, and before that an age of reptiles, with dinosaurs and large marine reptiles abounding, and before that an age of fishes, with no mammals, birds, or reptiles present. But, until 1859, humans were considered outside the realm of prehistory. It was generally thought that humans were a recent addition to the earth, perhaps 6000 years old, and were not contemporaries of mammoths and cave bears. Several discoveries in the 1830s and 1840s suggested to some that humans were ancient, but such claims were almost universally rejected.

Then, in 1859, the scientific world did a rapid about-face. The discovery of human tools, found alongside extinct animal remains, in a cave at Brixham, England, caused archaeologists to take another look at previous evidence for human antiquity, and to decide that the evidence was convincing after all. By 1870, the discoveries at Neanderthal (1856) and Engis (1833) had been re-evaluated and accepted as genuine, and new finds had been made at Cro-Magnon cave (1868) in southern France. New Neanderthal remains were found in France in the 1880s; in 1891, the most primitive human yet found, the so-called “Java man”, was unearthed in the East Indies. By the end of the century, even popular literature was displaying restoration scenes showing cave men fighting saber-toothed tigers, and human antiquity was a commonly accepted concept.

Our exhibition documents the discovery and the acceptance of human antiquity by displaying the books and journals in which the major discoveries were announced. There are 51 items in the exhibition. You may go through the exhibition item by item, or you may access the Index, Contents, and Outline pages, if you are looking for specific items. Either way, we hope you enjoy what you encounter. 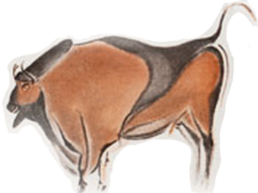 Watch videos from a lecture series that complemented the Blade and Bone exhibition. > More